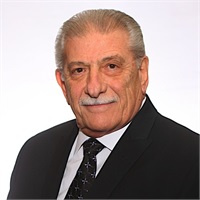 Over the course of more than 50 years in the industry, Tom has remained one of Guardian’s most consistently successful General Agents. He began his career in 1967 as an agent for Metropolitan Life before stepping into management in 1969. After 10 very successful years with Metropolitan, he made a career change and joined New England Life, where he spent the next 9 years building one of their largest agencies. Then, in 1986, Tom joined Guardian® as a General Agent with his partner, Mike Savino, to build Certified Financial Services.

Tom has spent the past 32 years growing Certified Financial Services as one of Guardian’s finest agencies, with more than 90 field representatives, making CFS a perennial top 10 agency. He is currently one of only four General Agents chosen to mentor other Guardian General Agents. He has served as a member of the Field Advisory Board several times and is a member of three Guardian Advisory Committees, Policyholder Services, Disability Income, and Innovative Underwriters Committees.

Throughout his career, Tom has received the industry’s top accolades as a General Agent from both Guardian and industry organizations.